Bayawan Negros Oriental: Far Away But Not Forgotten

I’ve never met my maternal grandparents. They both died relatively young. I’ve never even seen a picture of them but growing up I’ve learned to imagine their faces and what they were like just by listening to my mother’s stories about them.

They were buried in Bayawan’s public cemetery almost five decades ago. They both died from injuries they sustained from a vehicular accident. Details are shady as to what exactly happened. Their children were too young to recall the incident. My grandmother died days after in a Dumaguete hospital. My grandfather followed her to the grave months later. His eldest children said that he never fully recovered from his injuries and the pain of losing his wife.

Lola Elizabeth was a typical Visayan woman from that period. A devout religious and very industrious. She helps augment the salary of her husband who was then working for his relatives, the Diazes of Bacolod. She and her children lived  in Hacienda Fortuna in San Carlos. The location of their home suggest that her parents were farmers working for the Ledesma’s. My mother’s only tangible inheritance from her parents are her pierced ear. It was done by her mother when she was in grade school. Though Lola’s life was short she was never forgotten. Several grand daughters and great grand daughters were named after her.

The father was an adventurer. He preferred the life on the move. He was born and raised in Dumangas but chose a life away from his family. From Iloilo he traveled to Bacolod then to San Carlos where he met his future wife. He married young but this did not slowed him down. He was a known gambler – in life and with cards . He signed up for USAFFE and fought in the Dumaguete environs until its liberation. After the war, as if nothing happened, went back to his family and became a father for the fourth time. This daughter, their youngest, will have no memory of her parent. She was still a baby when they both died.

In the late 50’s, he was back in Bacolod, now working directly under the family of his cousin, Celia Diaz, the Negrense wife of Doy Laurel. He was later assigned in Bayawan, the largest town in Oriental Negros. He assisted in managing the vast farm lands of his employers. My mother is uncertain what was his job exactly under his wealthy relatives but because of his reputation, he was deeply trusted and was generously treated by them she said. He was awarded a property in Bacolod for his loyal service. My mother heard from elders when she was already in her teens that he sold this land. He stayed in Bayawan until his unexpected death. Before he died he entrusted the custody of his children to Maria “Maring” Diaz, another cousin who was married to an Ilocano Sacada man who settled in Bayawan.

Although my mother’s family became middle class, the children suffered greatly after the deaths of their parents. After the tragedy, my mother together with her siblings left Bayawan because of the oppression they suffered under the custody of the family that adopted all four of them. Nay Maring, according to my mother protected them and really look after their needs but the problem lies with the other family members who were reluctant to take them from the beginning.

Day Maring, as she was called,  was  “extremely kind”, almost a “santa”, my mother would tell us. Beautiful days with her starts in Sto Tomas Villanueva church this continues after her school when Nay Maring would accompany her while she do the chores around the house. It was this motherly bond that gave my mother the premonition some years back of Nay Maring’s passing. She has appeared many times in her dreams, “alive and happy” she said. What’s amazing is that what she told me as the year of Nay Maring’s year of death was close to what the local people in Barrio Banga confirmed. She was already in her 80’s.

They soon found their way back to San Carlos with their maternal relatives but this did not last long. They never seem to find a place to call home. The Diaz boys, now already in their teens tried their luck working in Subic. A few years later, they would all be reunited  in Olangapo. Now with families and stories of their own.

One of my goal this year was to reach Bayawan together with my mother and make that spiritual connection with these special folks that I never got to meet . I’ve always wanted to go to the place where they were buried, light candles, offer my prayers and thanks. “The only time that people really die is when they’ve been forgotten” I read from somewhere and I believe that this is true. These people who died  five decades ago, has always been alive in all of us because we remember them and the message of their lives.

Since my mother left Visayas, she hasn’t gone back – for almost 50 years! For her, this is more than just a holiday, it’s a fulfillment of a promise made – that one day, when things gets better, she’ll visit them. Now after all these years, finally, she made it. If she had the time and money, she would’ve done this a long time ago but we, her children was her priority. I’m grateful that God gave me the opportunity to make it happen for my mother. 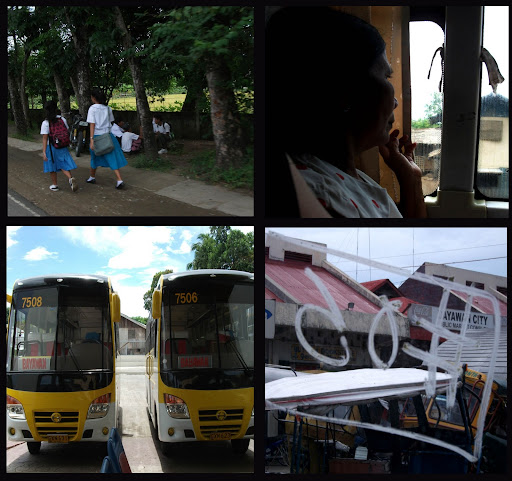 We were told that my grandparents were already transferred to the “komun”, the term for a common burial ground. Since no one has paid the lease, they were moved out. We expected this to be the case, so it did not surprised us. But my mother very well remembers where her father and mother where buried. She recalls young bamboos planted near the tombstone where her parents were laid to rest; native bamboos five to six feet tall, spaced about a foot from each other. Today, the young bamboos has become giants. Stretching some 20 feet high and has occupied a large part of the cemetery. It has been that long.

It was sad to see people being buried without even a marker. This is how poor some of our paisano’s are here. Being the biggest municipality in the province, I can’t understand why they cramped all their dead in such a small area. I was shocked to see the burial mounds – maybe because I’m used to seeing the dead placed inside niches. The cemetery is surrounded by sugar cane farms and is the only public burial ground in the poblacion.

I thank God for giving me and my mother this wonderful opportunity. The long  journey to Bayawan was all worth it.

Filipino Halloween? « With one's past…