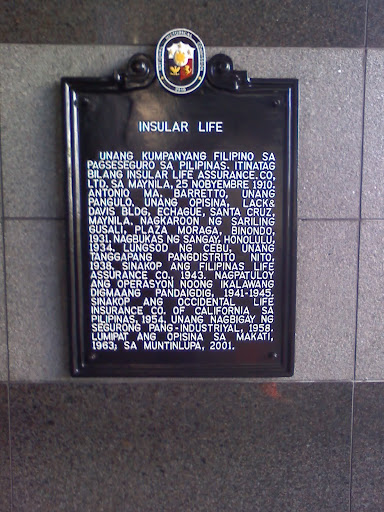 Insular Life  recently celebrated its 100th year. The first local insurer is considered not only a pioneer in Filipino business but one of the most reliable – they never ceased operation since their founding.

Even during the Japanese occupation!

Last November 25, an NHI marker was installed at their twin tower in Muntinlupa, a fitting dedication to an enduring Filipino company.

Although they had owned buildings in other places (originally in Echague) around the metro, the solid metal marker was installed in Filinvest Alabang, now the headquarters of their operations.

The only other historical marker in the city is located in New Bilibid prisons.

The company’s trademark in its building designs are the beautiful reliefs of Philippine cultural scenes in its facade. Artworks that depicts everyday Filipino life. This is a testament to the pride they have in our history which they were very much part of. I think there’s not a lot of company like them out there.

The company I work for rents a small office in this building. In the beginning I felt nothing special really,  it had no difference from all the other buildings but this changed when we moved up to one of its higher floors.

Every dawn, I’m always in for a threat. A majestic sunrise over Laguna de Ba-y! On a clear day, especially after a mild downpour, I can see Manila Bay on the west side.

Here in Alabang (not sure if the same thing applies to the other Insular properties), they exclusively hire Ilongo security personnels. Perhaps, their forte (and this I know for my parents are) is that they’re ‘malambing’ character. Works like a charm especially with rude and hostile employees and visitors.

I passed by Calle Echagüe, Quiapò, Manila this afternoon, but I missed the original building, LOL!!! That street, by the way, was named after Spanish Governor General Rafaél de Echagüe. This calle is now called Carlos Palanca Street. The first SM department store was also located in this street. Magcapitbahay lang palá dati ang SM at Insular Life. =)

Happy Independence Day « With one's past…

[…] more than ever. He passed away two years ago. I invite everyone, especially people from Muntinlupa (Insular is only the second structure, next to Bilibid prisons, where a national historical marker ha…) and the south metro to visit and appreciate Abueva’s murals, while it’s still there. […]

Fr. Jose Arcilla SJ on the importance of Spanish in studying Philippine history