Baluarte de San Diego is among the original surviving structures of the old Intramuros. A ruin as storied as the churches that once dotted 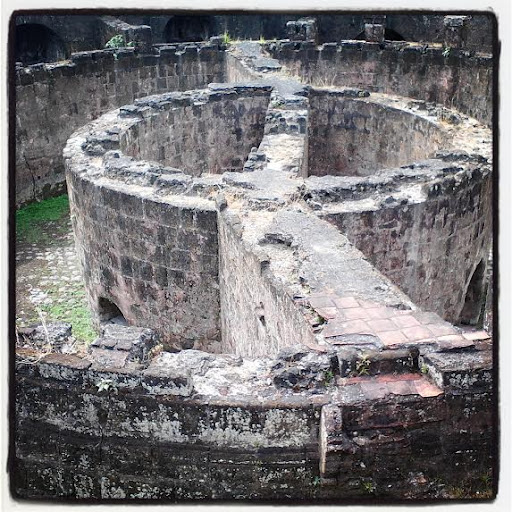 Intramuros, the baluarte is said to be the first area the British took during their advance to Manila. It is also among the first structure to be built in stone.

It surprises me that many tourists and even locals haven’t seen this oddly fascinating  circular fortification. If you don’t know its history, you’ll probably think of it as some gladiator ring. Or, as so many teachers that grapples with explaining Spanish ruins and fortifications, a prison for all our poor ‘indio’ ancestors. The baluarte was actually built to defend the Christian population that at the time was in its infancy inside what was ‘the’ Manila – Intramuros.

The man that had the fort built was Padre Antonio Sedeño, a Jesuit rector, who wr0te directly to the Spanish king to report on the condition of the colony. This priest was an influential man, sent here by no less than Felipe II. He lived in simplicity and busied himself preaching. But he would be remembered more by what he managed to build during his days in Intramuros — its first fort in stone.

Padre Sedeno had the fort built primarily to defend the city. He had artillery installed on it. He commissioned a legendary metal caster from Pampanga called Panday Pira (or pandaypira). The artillery was said to had been made at the Baluarte.

A historical writer notes, “Father Sedeño, in addition to his ordinary occupation of preaching… in his capacity as superior attended to the temporal affairs of the residence and to the construction of buildings. He was all the more busy in this latter occupation, from the scarcity, at that time, of architects and builders in Manila, for there were none at all. First he taught this art to the Indios, and then to the Chinese; and he inspired the bishop to build the first stone house ever erected in Manila. Encouraged by this scalpels, they continued to build others, until finally the city reached its present greatness.”

If there ever is a man we should consider pioneer in Filipino building in stone, this Padre Sedeño should be that man. This architect cum civil engineer started making Manila a city made of stone. “Formerly, the houses, though large and roomy, were all constructed of wood and cane. In short the good father was the architect of the city, and the people caused him no little labor in inspecting, planning, and arranging its edifices; he aided them out of pure charity and zeal for the advancement of the holy Church, which he hoped would be very great in those regions,” a chronicler that lived in that era wrote.

During this period of ‘building in stone’, Padre Sedeño constructed the first ever fort to defend Intramuros.

“The first ever fort was plan under his direction, planning and aid, which cost him no little effort. This fortress that they call Guia, because it is situated at the principal gate of the city which leads out to the chapel of Nuestra Senora de Guia.” This church in Ermita, considered the oldest Marian shrine in the country, altghough no longer the original, is still situated where it was founded.

Padre Sedeño must have been Pope Francis-like. A man who knew the priest wrote “I once accompanied him when he went to furnish the plans for a stairway in one of the principal houses; ad he showed so much patience and indulgence toward the errors which the Indios had committed in his absences that he did not lose his temper in either word or look, but merely had what was wrong taken apart and done over again.”

The man responsible for the Baluarte’s beautiful landscape is they ‘Lakay’. He said the name means ‘old’, I thought it meant ‘friend’.

His father was brought to Intramuros by the Americans from Pangasinan. They intended for him to help clean the area. And there was a lot of clean up operations during his time. The war just ended and almost everything inside the walled city was in ruins. The father married an Ilonga and they started living in one of the church ruins. They were evicted so they moved to one of the abandoned house. The 2nd generation Layosas still squats in the same area. They pay a monthly fee of a little over a thousand bucks. Before, the father never paid a dime.

I feel for Mang Lakay, aside from his troubles at home (one of his child suffers from an incurable disease) he has not been treated fairly by his employers—the Intramuros Administration. He started working for them in the late 70’s and believe it or not his employment status today remains ‘contractual’.

Obviously, loyalty counts for nothing there!

All those trees you see in that part of Intramuros was planted by Lakay. Add the new attraction, the bonsai garden. Oh boy those bonsais are among the best I’ve seen. And if you happen to see the ‘Nayong Pilipino’ garden back in the day, he was part of that projects landscaping too.

“Well, at least, you have these beautiful plants,” I said. “Oo, sa totoo lang yan na lang ang nakakapagpasaya sa akin,” he replied. I admire such simple folks. While he’s troubled by his finances, there’s this happiness inside him that someone like me, who complains about the most trivial things in life could never understand.

But not all of his bosses were bad. In fact, he fondly remember Jaime Laya, as “the best administrator Intramuros ever had!” He also recalls meeting Architect Imperial, the man who planned the restoration of the walls during Laya’s term. Mang Lakay remembers him as “soft spoken, man of few word but always find time to check on us, the workers.” Architect Imperial’s wife, Alegria, now lives in Canada and is a friend.

If you see a balete or a plant growing in the walls of Intramuros, chances are these would be extracted by Lakay. He would then work his magic and put these in pots, with a little trimming and wiring, they’d become beautiful bonsais! He walks around Manila looking for potential bonsais too. A place that’s being landscaped or a road being widened are the perfect hunts. Here he finds the best plants and trees for his garden.

In his wonderful creations, he finds the riches that he can’t in paychecks.

I am realising that Filipinas owns much more to the friars than to the Spaniards or the Americans together: This baluarte, the Universities and schools, the pueblos, the drinkable water of Manila, the Observatorio, the Monte de Piedad, the crops, the music, the conservation of the Filipino languages, the carabaos. Specially considering the limited funds they had and that they were not specialists in these fields..They were like Titans or Prometheus of a new country and a new nation. Instead of being named Filipinas (for Phillip II of Spain), it should be named Frailesland (for people like fr Sedeño). I… Read more »

‘Frailesland’ that’s hilarious. But very few have an open mind to even consider these things and I can’t blame filipinos for having this bias because all of us were conditioned to hate that past.