An Unpublished Book and some Throwback “Thank Yous…”

I took part in writing a biography a few years ago. It was about the longest serving town mayor of San Pedro Laguna, Calixto Cataquiz, an unpretentious local politician who became a friend during the course of the project.

I would have not agreed to write the bio if my friend, Pepe Alas, was not on board. I was a supervisor at a BPO in Alabang; Pepe, a Spanish speaking agent under my program. I assumed the writing task would be easier working with someone I knew personally. We often times wrote while we’re both in the office.

We had a great time writing. Of course, there were a few bumps and misses but nothing we couldn’t handle. The only frustration was that the book remained unpublished.

The last time I caught up with Mayor Cataquiz was during Pepe’s wedding. He told me of a few political issues that made him decide to shelve the project. The Mayor was abruptly disqualified a week before the last election—his wife took over and won.

So, that’s that for me writing for politicians. I’ll stick writing here—for now.

Pepe still believes that the book would get published. He’s still working at it, putting the finishing touches. He became a close supporter of the Cataquizs. The latter aided him during the perilous and costly medical emergency brought about by his wife’s pregnancy.

During our time writing, we met several cultural workers in San Pedro. Like this friendly chap, Sonny Ordonez, author of a book dedicated to San Pedro’s miraculous Lolo Uweng, a Santo Sepulcro enshrined in Landayan. He cheered us to continue, gave helpful tips on how to write.

And there were other strangers whom we have never personally known but did us favors. Like Gemma Cruz Araneta who wrote about our small book project in her Manila Bulletin column. I never got to thank her personally but I appreciate what she did for us.

You don’t always get what you want—but you’re getting something. That’s for sure. You’ll just have to learn to appreciate the little things, the friends you make, the invisible hands that comes out of nowhere to help. 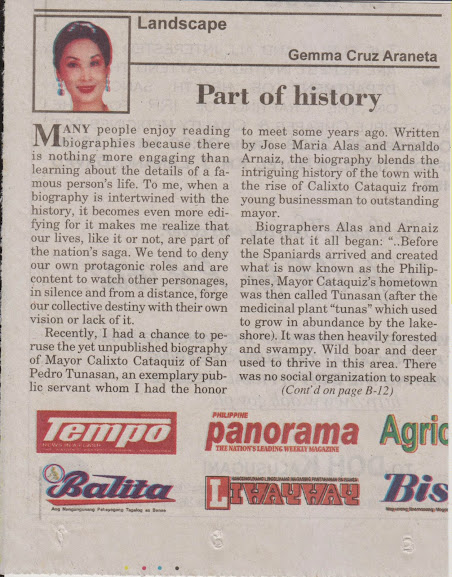 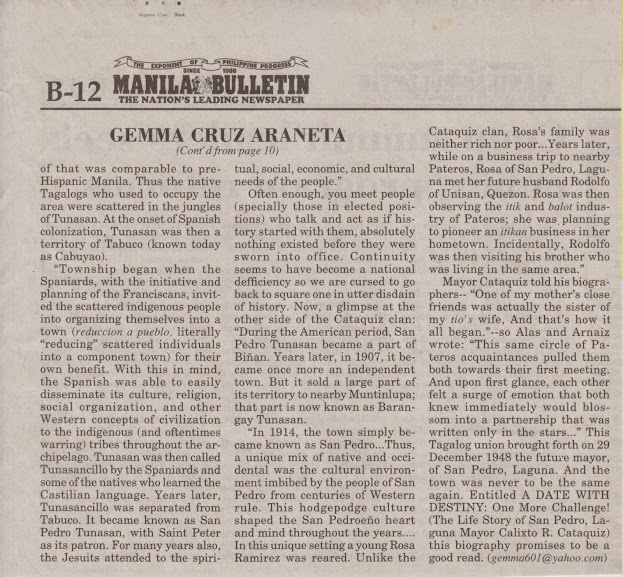 Reblogged this on FILIPINO eSCRIBBLES and commented: It was nice to hear former Mayor Calixto Catáquiz’s friendly voice again. This charismatic political veteran, now known as San Pedro Tunasán’s “Living Legend”, was the man who helped put my trust back into politics. I haven’t seen nor talked to him for months because I’ve been busy trying to sort out financial problems brought about by Yeyette’s delicate and life-threatening childbirth. This afternoon, I received a phone call from him. The line was terrible, but his reassuring voice still went through. From what little I understood, he said something about going to… Read more »