That Dam in Tres Cruces Tanza

Spurred by historian Pio Andrade Jr. during our recent meeting (last year, November), I went to Tanza earlier to look for the Tres Cruces dam. “Go see it, it’s still there… look at how they built that dam…it’s quite advance for its time” he said.

I asked Andrade to visit the irrigation projects that the Friars established in Cavite with me a few years ago. He’s an expert in Friar Contributions having made extensive studies on the subject for his lectures and articles. But because of his health he told me he could no longer do it; I would now attempt to record the status of these heritage structures here alone.

Tres Cruces is a barrio in Tanza (formerly Santa Cruz de Malabon). It is an old town that produced notable Filipinos: Felipe Calderon, a patriot, founder of local law schools, the Cenizals: Josefino and Olivia, both Filipino artist of great talents. Josefino translated from the original Bisaya the traditional Christmas song “Ang Pasko ay Sumapit,” which is erroneously attributed to him.

In Tres Cruces’ barrio hall (2.8 kilometers from the Riego de Dios army camp) I approached these guys clustered in a wooden bench to ask for directions. The instruction was simple, “see that camachile? turn left then go straight.” I ate camachile in grade school but have the slightest idea what its tree look like! But I know that the squally wind in the vicinity could only come from a lake (I live near one). Turns out that the lake of Tres Cruces and the dam was nearby, concealed by the houses erected on its shore.

While I was snapping pictures of the placid lake and its imposing dam, I was surprised to see the barangay chief, Vicente Tulipan, right behind me; he offered to accompany this blogger around the barrio. Turns out that he’s a beneficiary of the irrigation. The dam is now administered by the National Irrigation Authority. He said he pays 1500 pesos per hectare every harvest season. This is on top of the lease (he does not own the land) and all the other expenditures he settles once he sold his produce. “Do you earn enough?” I asked, “Barely enough but that’s the life of a farmer in this country.” 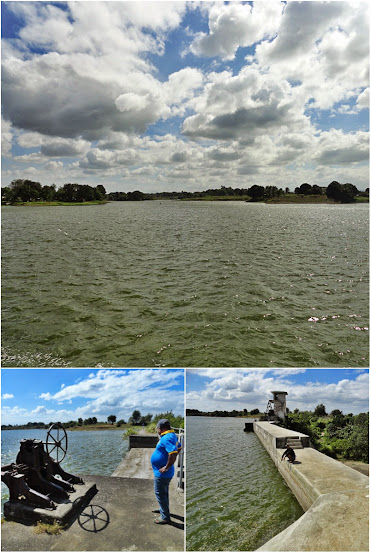 We proceeded to the dam’s walls, which had been recently reinforced by concrete. A typhoon in 2013 cracked open the barrier killing several locals and dismantling a pig farm downstream. The barrier and its foundation were originally built using solid adobe blocks; there are portions where these materials could still be seen. The adobes are adjoined by durable mortar but porous which permits it to absorb water.

Almost the entire dam had already been covered with cement; if you have not read its history you would not think of it as a century old structure. This project was undertaken by the Augustin Recollect mission and was completed in 1886. It has gone several repairs, the first major one was in 1915. This was recorded by Engineer Benett who was assigned by the Americans to oversee the project.

According to Andrade the dam was “watering the large portion of the estate of San Francisco de Malabon. Besides the dams there are great system of tunnels, driven through the rock, carrying the water to the canals distributing it over the fields. These tunnels vary from 45 to 80 inches in width and 60 to 80 inches in height; they are not lined, but faced at the bents where men may go down to clean them of any sediments.”

I asked the barrio chief about stories he heard from his elders about the lake and its dam. He recounts, “I remember being amazed at how it provides water to the rice fields but no one knows how the tunnels (he calls it “mina”) were excavated… there are some legends about it but no one’s seems to know who did it during the Spanish time. It is not even lined according to the elders. I would take you to where the water comes out.” From the lake, we drove for less than a kilometer where the water from the lake gushes out, flooding the irrigation channels. A few meters away is the farm of the barrio chief. Fascinating is that houses and roads were built on top of the water tunnel. This tunnel, according to official records, is about 300 meters and had already been rehabilitated during the American administration. At one point, they had to drain the dam which provided the townsfolk an assortment of fishes estimated to be around thousands of pounds!

In the 1900’s additional buttresses for the entire structure were built to make it stable. Appropriation was made for 30,000 pesos to “preserve the irrigation system…to put the dam in a safe condition.” Another spillway was also added to control water levels. The rehabilitation which started in 1915 was completed two years after. Today, National Irrigation Administration are the ones in charge of guaranteeing the dam’s stability; which they failed to do when it cracked and dropped an ungodly volume of water downstream drowning some locals in the past.

It would be good to note that the Friars bought the lands when it was hardly cultivated. Like Imus, a back wood area that they manage to transform into a productive farm estate. When these lands started to yield crops, locals demanded that they should be the ones running everything if not use them for free. So the landless revolted, led by the landed, who later enriched themselves with more lands. Remember, Aguinaldo and his men were no mendicants but prosperous men whose families earned their fortune from lands the Friars developed for farming. 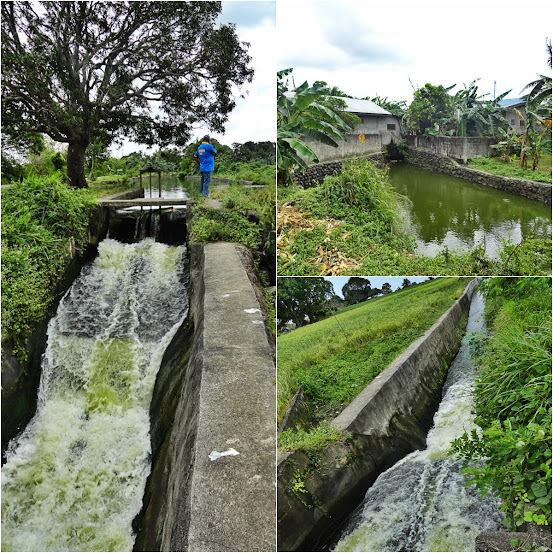 Speaking of Friar land, after the revolution, these were sold off through the administration of American Governor Taft. It must be explained that majority of these lands did not go to the simple farmer but to rich families who had the means and influence to buy them. Some of the names are familiar—like Emilio Aguinaldo and Jose Laurel; the former was forced to give up some of his friar lands by the courts, the latter would be indicted for not paying taxes for his acquired Friar lands.

According to Andrade, “without taking into account these improvements (dams and irrigation canals), the Friars lend the estates to tenants who paid them 10% of the product of the land, or perhaps somewhat less than 10%, if not in money, in kind.” After the local landowners took over, apart from the lease the farmers have to pay, there are numerous expenses that deprives him of his bounty. Remember, they have to pay the National Irrigation Agency too. There’s no such thing as a free meal—not even a mass revolution could guarantee that!

Chief Vicente Tulipan attest that his barangay is not only a peaceful place but charming too. Not too long ago he said there was some discussion of making the dam a kind of attraction by a local politico. Nothing happened of course but he still thinks that it’s a good idea.

Gentri Naturally | With one's past...

[…] visiting the Tres Cruces of Tanza, I dropped by General Trias to see my Lola. Our lone surviving grandparent on both sides. The last […]

Thanks for sharing De AnDa… I’ve been looking for new places in Cavite to explore. I will include this in my biking itineraries.