I observed that the article I wrote about Majayjay’s “Tulay Pigue” is receiving hits lately. Some years has passed since the last time I saw Majayjay. I managed to obtain some more details about the bridge that has become a symbol of Friar’s abuse of power to many.

I consulted the historian Pio Andrade Jr. about “Puente del Capricho” (the Majayjay bridge’s other name) and he furnished me a copy of his study and article that appeared in his Past/Present column. 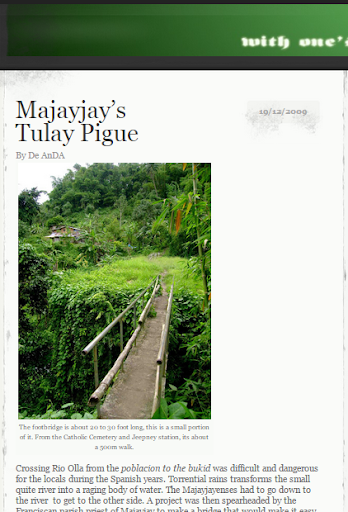 It earned its bad name, “Puente del Capricho,” not because it cost an ungodly amount of gold to build (in Tagalog when we say “capricho” we mean lavish or luho) but because the Spanish civil administrators found Fr. Victorino del Moral’s project violating all sound bridge-building principles—the “capricho” meant “unpredictable”. The legend that Fr. Del Moral had it built for his comfort could not be farther from the truth.

Fr. Del Moral approached the government officials to have a bridge constructed to connect the western and the northwest part of Majajay. The bridge would allow transport and pedestrian crossing over the Holla river. The engineers denied the priest’s recommendation. But the Friar decided to do it anyway. This slighted the civil authorities at that time. In response they maligned the priest’s standing in Manila.

This bridge, completed in 1851, endured many floods, typhoons and earthquakes until it was dismantled in the early 1900’s.

It was the chief architect, part of the civil administration, who coined the term “capricho.” For according to this man, “the way it was built is completely capricious.” (This dismisses claims that it was referred to as capricious because it was created out of the priest’s wordly obsession—the “capricho” meant something else, the guy just wanted to build a bridge!) Fr. Felix Huerta opinion was that it was, “a bridge boldly constructed that, although condemned  by science itself, had the impudence to stay firm and strong, capable of resisting the tremors of September 16, 1852 and July 3, 1863, with the slightest damage, neither can the furious torrents from the great mountain of Banahaw open in it a small breach.”

I have heard of stories about how exorbitant the bridge cost was and the used of harsh forced labor. According to one local, legend has it that the slightest mistake a worker makes merits a whipping in the ass, hence the Tagalog name “Tulay sa Pigue.”

It’s incredible that a solitary priest would lash grown men like a mad man in that mountainous town known for bandits. They could have easily push him to his death over the cliff; down to Holla River. We all know that Filipinos are not the kind that takes humiliation lightly. But who knows, I have not seen a photo of Fr. Del Moral, for all we know he could have been a ten foot colored green giant.

Most whimsical was that the bridge did not cost the government nor the people anything. Historian Andrade writes: “the most illogical aspect of the bridge construction was that it was not in the budget and had not cost a single centavo of the people’s taxes.”