A young local politician told me that the origin of Alabang is the word abang (tagalog for “to wait”). Bandits during the Spanish era use to ambush unsuspecting people he said.

Legends are more appealing than real history. The small Rio Alban (the one in Festival Mall) gave her name to Alabang. Boring story, I know, the legend’s more catchy.

Three years ago, I blogged about the origin of Muntinlupa’s barrio names. Many were surprised that all had botanical word origins.

Most stories about how places got its name are fabulated. They’re mostly “alamat” (legends) but Filipinos takes them as facts. 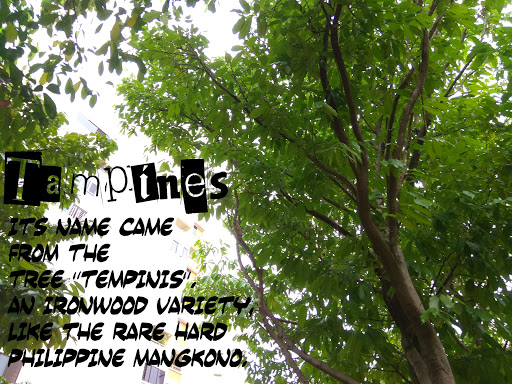 Pre-colonial Singapore were populated by Malays that had the same practice. They had a profound admiration towards nature and named places to honor it.

The names of the two towns I call home here, Punngol and Tampines, had natural and botanic origins.

Two years ago, we moved to Tampines township. Its name came from the tree “tempinis”. An ironwood variety, like the rare hard Philippine mangkono.

Punggol town got its name from an old Malay word. It was a method of gathering fruits from trees by hurling clubs. Our ancestors adapted the word in tagalog, “pukol”, which generally means “to throw”.

You see, the intangible historical links are there, we only need to pay attention.

Some other places Malays named after plants here are: the heritage district of Kampong Glam, after the tree Gelam. Kranji (I wrote about its WWII site here) from the keranji tree. Sembawang, Katong and many others.

The popular Filipino hangout place, Orchard Road, got its name from trees that used to lined it. What kind of tree? according to local historians, nutmeg. Not far from Orchard there’s a street called Nutmeg.

In the Philippines we call nutmeg as tanghas or duguan (from the red flesh the covers the seeds). The seed is dried up and grounded. It is used as spice and skin medicine.

I grew up in a street called Bagtican (white lauan). I knew even as a child that it’s a tree but never saw one until 9 years ago in Los Baños. It’s a threatened tree because of market demand.

Why knowing the real story behind places names is important?

Well, for one it dispels ludicrous myths that people ends up believing—and studying toponymy (ah, the scientific and fancy name of the study of places names) is a gateway to history.

Try researching where your place got its name and you’ll go into a history rabbit hole!