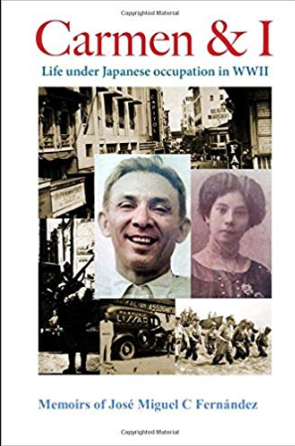 Reading little known diaries and memoirs are not only entertaining, they’re a great resource of anecdotal and first-hand historical information. I’m a regular reader of Manuel Quezon III’s The Philippine Diary Project, as its name suggests, it’s a collection of diaries from both less known and key historical figures.

I recently stumbled upon this book titled, “Carmen and I,” about Jose Miguel Fernandez, a Spanish mestizo customs officer, born in Candon, Ilocos. The name won’t ring a bell but he was a diligent writer, whose life story weaves through important historical events. He lived through the Philippine revolution, the Philippine-American War, and the Pacific war. Fernandez’s grandchild, Maria Godinez, realized the value of what he had written and published it in 2015.

The first time I heard of Intramuros was from our neighbor, Doña Amparo, everybody calls her “Mommy,” a “Lola” figure I look up to growing up. She was born there and for a time lived within its walls. But the Intramuros she knew in her early life was ravaged during WWII. So bad that even the religious orders, except the Augustinians, left its confines for good. But according to Fernandez, as early as the 1930s, prominent families had begun to move out.

“We lived at 82 Beaterio Street, Intramuros, where all of my children were born—except the last one, Alicia who was also called Tanita. In the early 1930s, we moved to San Juan. Many of the families who moved out of Intramuros went to live in San Juan because it was new, spacious and clean. At that time, San Juan was a hilly area and when the Americans developed it as a residential area, they called it San Juan Heights. The Americans standardized the house and lot sizes. Houses were generally two storeys; some were similar to each other and most had a garden.”

“At first, a Mr Pickering was in charge of San Juan Heights. Sometime later Ortigas & Company, headed by Francisco B Ortigas Sr, got involved in the development of real estate. When San Juan Heights opened, the majority of the early residents were Americans, Spanish mestizos and Philippine government officials—for example, Justice Abad Santos.

Fernandez then went on to describe his San Juan abode. He actually paid for in installments which I find intriguing. Turns out not all buyers of properties then pay cash or gold! They’re regular homebuyers who avail of loans too, like most of us today.

“It was a lovely two-storey house on a corner lot along G Reyes Street, San Juan. It had a large veranda and a big garden. Some of our neighbours were the Villanueva sisters who lived next to us, the Quemuel family in front of us, and the Osaeta, Castillo and Salgado families who lived along J Ruiz Street. The children loved this place but the quiet street was too secluded for my liking. I preferred to live in a place with lots of activity. Somehow, I felt safer in a place where humanity swarmed busily around, rather than in an isolated location. I have always liked having people around me.”

Imagine how provincial San Juan must have felt then compared to Manila. You can travel the 8-kilometer distance between these two cities in less than an hour, without traffic, of course, today. Back in the day, the journey must have been time-consumingly pleasant.

“When we arrived in Iloilo, I took everybody to the house I had rented and helped them to get settled. It was a big house, just a street away from the waterfront—a street called General Blanco. It had a big garden in front and the fence was full of flowering bougainvillea. It had a garage that could fit up to four cars. Entering the house, it had an impressively grand staircase that was wide at the ground floor and curved upwards on both sides to the upper floor. There were three bedrooms upstairs, two bedrooms downstairs, and rooms for the household helpers on the ground floor.”

Some of the locations Fernandez mentioned in Fernandez’s memoirs still exist, like the Aduana (custom house along Sts. Looney and Aduana) in Iloilo. I particularly enjoyed his accounts. I wonder if the house he resided in was the ruins along Gen. Blanco Street. It was still there the last time I visited, they can adapt it for re-use and make it an attraction. What I remember from is that the entire street has parked vehicles on both sides. It is fair to say that it has deteriorated, a far cry from its old repute as an affluent street. It is known to be the location of the Jesuit’s Santa Maria Church, also known as Lady of China. I’m sure some are worried why it’s called that these days, well, it has been standing there for more than half a century. The Jesuit’s fleeing China build it, along with its school.

The street appears to have been high end back in the day where many prominent families resided. I could imagine that it was because of its seaside location. I remember it well because I walked within its vicinity in the past, it’s where you enter when you’re going to the port terminal to Guimaras.

Across the street lived a family that was Spanish–Chinese, called Marquez–Lim. The other families along the street were the Zamoras and Lopezes. Sometimes my children looked across at the neighbour’s front garden from the upper windows of our house and were astonished to see how wealthy they were. Some families had numerous bicycles and most of the families had a personal maid supervising each child. A Hindu doctor and his family lived down at the corner of the street. It was quite convenient knowing that a medical doctor was close by.

The rented house was too big for just the two of us so Julito and I moved into the Hotel Madrid—a two-storey boutique hotel with only ten suites. It wasn’t a luxurious place; the lobby flowed into a dining area immediately upon entering. It was more like a pension house even though the owners called it a hotel. Overall, it was a pleasant place to stay and the other guests were quite interesting to meet.

My Aunt in Dumangas toured me around this area many years ago. I told her that I’m into history and she knew exactly what I’d like about old Iloilo. When I brought my mother back in Iloilo, her first after she left it as a child, Aunt brought us back in the area. We capped off the tour with a hearty launch at Tatoy’s.

Another person that got me into the history of Iloilo is the writer, historian and flamenco instructor Guillermo Gomez Rivera. He also happens to be a distant kin. He’s a walking encyclopedia of everything Filipino history and when it comes to Ilongo history, the man have a memory of an elephant. His book Quis Ut Deus, the first Spanish novel by a Filipino since Abad’s “La Vida,” is based on Iloilo.

Fernandez’s other memoir was about his childhood called “Cayan,” translated from the original Spanish. I’ll get it in Kindle (this is how I get my books these days) next year.

Belated thank you for another mention. Would you know how I can get a copy of this diary?>

Hey Manolo, the book is available for Kindle. His granddaughter, Maria Godinez, compiled and edited it. – A