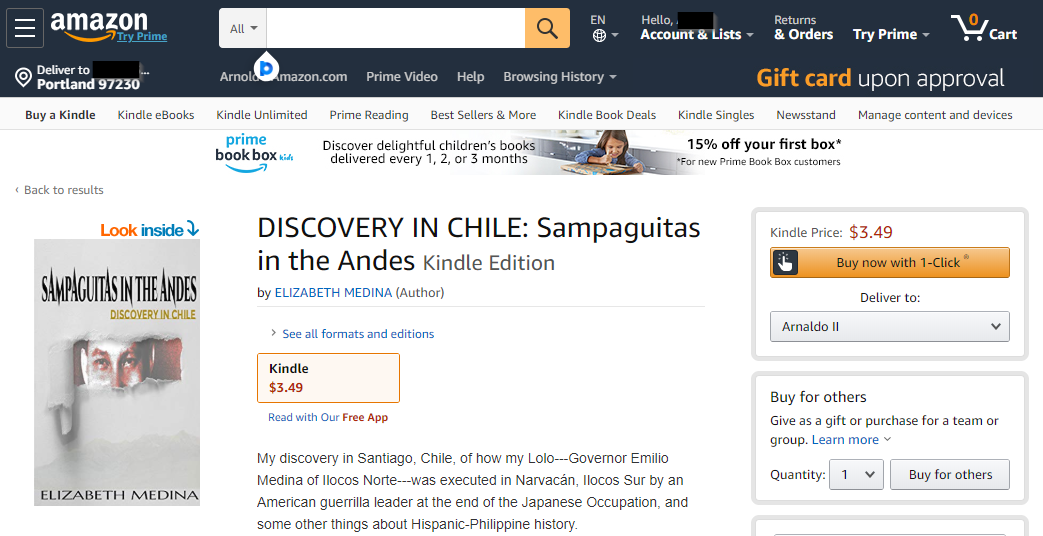 Sampaguitas in the Andes now in Kindle Amazon

I recently released Elizabeth Medina’s “Sampaguitas in the Andes” on Kindle. I requested the author to publish it on Amazon’s platform because I felt it deserves to reach more Filipinos worldwide.

The original Spanish version, “Sampaguitas en la cordillera” was released in Chile in 2006. She later translated it into English. So, I had my work cut out for me. My participation was limited to book cover design, minimal editing, and conversion to Kindle format.

Sampaguitas was a pleasant discovery. Reading it took me on an emotional journey. I was reading a family history that resembled my own and, like the author, I was ignorant of the fate of my ancestors until I started my own research.

Medina’s grandfather, Gov. Emilio Medina was executed as the war was ending by guerillas in Ilocos. My Father’s family suffered losses at the hands of the same people in Negros. One of the most gruesome stories my Father ever told was that of witnessing his uncle, Castor Cañete, buried alive because he was accused of being a Japanese collaborator.

I can’t help but think, how many Filipinos went through the same experience? How many were forced to forget what happened because they had to rebuild their lives from scratch for their children’s sake?

At the tail end of the war, those believed to have collaborated with the Japanese were persecuted and killed. Many of them lie buried with their history, their descendants oblivious of what happened to them. Their histories are complex and multilayered, difficult to understand.

The generation of Gov. Medina had started to disappear even before the war began. Many spoke Spanish and lived a way of life that was deeply shaped by our Hispanofilipino culture and traditions. American policies had started to dismantle their old world.

The historian Guillermo Gomez Rivera aptly describes what happened; he said, “It (the American occupation) truncated us from our old world.”

Another parallel to the story was that I had mestizo grandparents who never became part of my life; and yet their influence, though invisible, weighs heavy—as if they’re pleading not to be forgotten.

Andrea Gallo of Università “Ca’ Foscari” Venezia interviewed Medina in 2008, writing about the chance encounter between the author and Angel García, a Hispano-filipino gentleman, at the Philippine embassy in Chile (the following translated from Spanish):

Her reencounter with her “mythical” grandfather took place in Santiago de Chile in 1990. During a buffet at the Philippine Embassy, Elizabeth, by chance, came into contact with a “hispanofilipino” who had known her grandfather and who “delivered, unintentionally, a message from my grandfather.”  It was this unexpected encounter that led the author to “a secret desire to return and recover the point of origin” and made her aware of “the internal need to complete things” (p. 85). For this, she realized that it was necessary to travel, or rather, to travel to those remote regions of memory, in northern Luzon, and see “beautiful” places “in the middle of nowhere” (p. 110), speaking with witnesses who could provide fragments of truth about herself, her family and personal history. The rediscovery of memory: “The psychological importance of such an act transcends the mere revelation of ”true facts“ or anecdotal reality.

In the book, Medina says, on meeting Angel: “Suddenly, it had all become real. Through Angel Garcia, my grandfather reached across a gulf of time and touched me. It gave new purpose to the long trip home that I would soon be making.”

What were the chances of that happening?

More on my next blog.