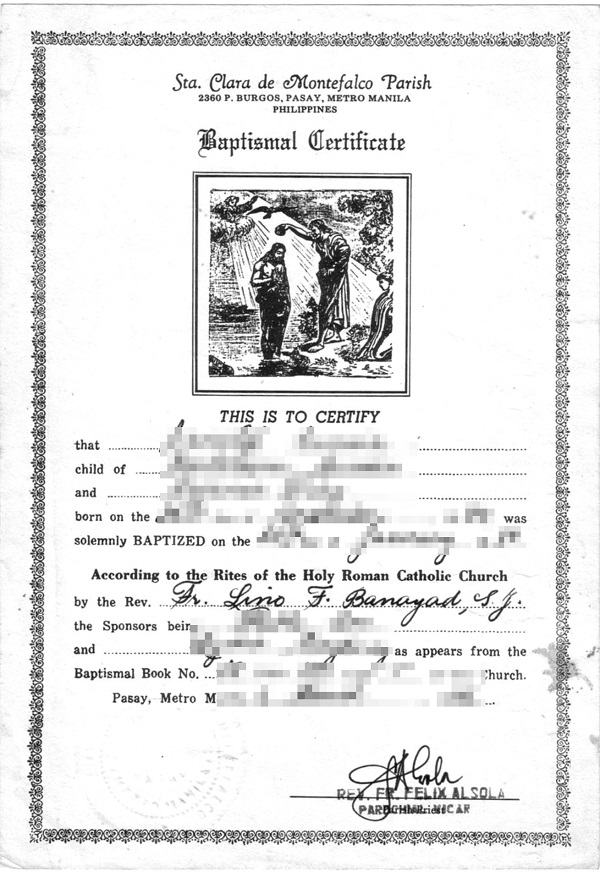 Starting a mini tradition of sorts

Two years ago, it was my son’s turn to be baptized. I decided to have it in another town. Here 🇸🇬 you ask permission from the local parish first. You need the local priest’s signature.

I invited only a handful of friends. Two of them to stand as godparents. You can’t have more than two and they must be present. Back home 🇵🇭, the more, the merrier. Pwede pa magpa-proxy mga ninong.

All our guests asked why I picked a church (the Jesuit’s St. Ignatius’ on King’s Road) in the west area. About an hour by bus from where we live. While the local parish is walking distance from our apartment.

My answer. I prefer a Jesuit priest.

Nobody pressed me for details. The answer must have been strange for everybody. I intend to start a mini tradition of sorts.

Who were in attendance

Weeks before my son’s baptism, I started thinking about how my parents prepared for mine. They had meager resources. My father’s a factory worker and my mother a housewife. So they must have planned (and saved money) for everything.

The church, Santa Clara in Pasay, they picked because it was near. After the baptismal, there were two photos taken. Followed by a simple merienda in Aristocrat restaurant in Malate.

My godparents were close to my parents. The godfather was a friend of my father who died when I was little. My godmother’s my aunt, my mother’s youngest sibling.

But I was curious who was the priest who performed the baptism. Nobody seems to know. But I thought that was important.

So months before my son’s baptism I did my research. It was not hard to find my baptist’s name, Fr. Lino Banayad SJ. It’s there in my baptismal certificate.

I found a grainy photo of Fr. Lino Banayad SJ (†) in an old newspaper. He was accepting an award from Cardinal Sin (†). I thought he must have been an important priest.

Ambassador José Abeto Zaide, who writes a column in Manila Bulletin, remembers Fr. Lino Banayad SJ as their, “ethics and philosophy professor… dusted our catechism to be able to teach at Marikina public school, and inoculated us against Blue Seal and intramurals within the faculty house.”

Interesting was that he was a contemporary and friend of historian and first Filipino Jesuit provincial superior, Fr. Horacio de la Costa. They probably had endless discussions about Philippine and church history. Imagine being a fly on the wall in that room!

Fr. de la Costa’s work has been influential in my interest in Philippine history. His book “The Jesuits in the Philippines, 1581–1768,” I carry with me wherever I go. Another historian, Fr. José S. Arcilla, also a Jesuit, has had a big impact on me.

Many online references about Fr. Lino had to do with him teaching Catechism. It was his priestly forte. Leaders and faithful all over, sent to him to learn. He was “a Catechism expert who clearly defined what’s wrong and what’s right in his ethics classes,” according to one of his students.

Another mentions him as an admirer of nature and the outdoors.

Sometimes because they wear vestments we forget that they’re normal human beings, like us.

Baptism was positively received by our ancestors. No better proof than how it became a fixture in Filipino life.

Large number of conversion is owed to the fact that Friars labored to bring a new concept—salvation through Christ.

Imagine if you were a slave and hearing that for the first time. That would have been a powerful liberating thing to hear.

Catholicism’s historical effects have long-lasting implications for us Filipinos. It gave us an identity and a sense of belonging.

American historian, John Leddy Phelan wrote, “More than any other single factor a religious commitment kept the Spanish state in the economically profitless colony of the Philippines.” He adds, “As a direct consequence of Spanish colonization, the Filipinos are unique for being the only Oriental people profoundly and consistently influenced by Occidental (Western) culture for the last four centuries.”

And it all started with that ritual that many of us still practice to this day, the binyag (baptism).

If you stumble across this and have something to share about Fr. Lino, please share them here. ❤️

Here’s another blog I wrote about another priest, Fr. Gerry Tapiador. If it weren’t for his little act of kindness, I would have not remained Catholic.

Hi! I hope you’re doing well in this time of pandemic. I came across your entry about looking through your baptismal history while researching and looking up articles about Fr. Lino Banayad. My grandmother is a niece of his from the Banayad clan and she was quite fond of Lolo Pari or Pops, as relatives referred to him. On behalf of our family, I’d like to extend our gratitude for acknowledging him as a part of your personal history and establishing a tradition of being baptized by Jesuits in your family. If, by any chance, you happen to come across… Read more »