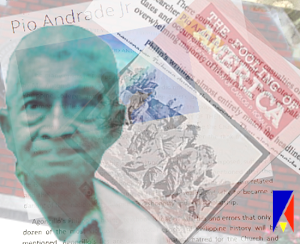 The period from Ninoy’s Assassination to EDSA Revolution was covered by Agoncillo in only four pages; thus, Agoncillo did not mention many important historical happenings, such as

1. American pressure for Marcos to reform;

2. The rise of the mosquito press;

4. The convening of the Assembly in which despite the left’s boycott and Marcos’ dirty election tactics. The opposition won big because of the participation of nuns and clergy to protect the ballot;

5. The discovery that governments’ financial records were doctored to make the economy look rosy;

6. The flight of capital away from the Philippines; 6. The RAM and their bungled coup attempt which people power turned to the glorious EDSA I;

8. The four coups that Cory survived; 10. Cory’s big mistake of abolishing the Department of Energy;

9. The natural disasters that happened during Cory’s term: the killer earthquake, the two typhoons, and the Pinatubo eruption; etc….

No wonder that Bongbong Marcos nearly won the vice-presidency because the young generation is not being taught the heinous evils his father did to the country.

World War II affected Philippine history much more than the KKK, but Agoncillo treated the epoch superficially, so students would not know or realize how much harm the event did to the country, economically, culturally, morally, politically, psychologically, etc… And the chapter on WW II is spiced with big lies which showed beyond a reasonable doubt that Agoncillo had not done adequate research on research on WWII. He wrote about:

“It is while Nomura was Presenting the goodwill peace project that the Japanese bombers surprised Pearl Harbor, Hawaii, and sank the cream of the American Navy.” The Japanese bombers wrought heavy damages on Pearl Harbor but it did not sink the cream of the US Navy because the big ships sank and, or damaged where the battleships which were no longer the main battle wagon of any navy but the aircraft carriers. Moreover, the Japanese forgot to bomb the fuel depots and the workshops.

“Simultaneously, the enemy struck Guam and Midway Islands which fell on the same day.” p 404 Japan did struck Guam same day as Pearl Harbor but they took Guam only on December 11. The Japanese only struck Midway on June 2-4, 1942 in the greatest aircraft carrier battles in history which ended in a great US Navy victory which turned the tide of the war in the Pacific. Agoncillo had written of a great historical battle he had not read at all.

The map of the Battle of Bataan has at least two dozen big errors when compared to the maps in John Toland’s BUT NOT IN SHAME and that in the HISTORY OF WORLD WAR II series put up by the British Imperial War Museum.

Agoncillo’s WWII is replete with missing information either complete or partial. In the Chapter dealing with the years 1920-1941, there is no mention of the growth of radio in the Philippines. Mention about Philippine films in Spanish.

One of the biggest boons to the Philippines was the gold boom which lasted from 1933 — 1941. Agoncillo had only two sentences about it. He wrote in p. 389: “mining, one of the most important industries, became the backbone of the worth of gold; the figure soared to the Philippine economy. In 1929, the gold mining industry produced P6,740,781 worth of gold, the figure soared to P31, 979, 781 in 1935 and became the biggest gold producing country in the world.”

Gold production in 1935 was at P16,000,000, not P31,979,781. Agoncillo did not mention the gold boom lifted the Philippines out of the economic depression, provided direct and indirect employment to a million people, stimulated the growth of commercial aviation, increased the Philippine government income, and resulted in the building of vital roads, ports, bridges, and infrastructures in gold mining areas. Agoncillo did not mention that from only four gold mines in 1929, the number soared to 39 in 1941 and provided capital for mining ventures in basic metals and the Philippines became the 6th biggest gold producer in the world.

In the Chapter “Liberation of the Philippines”,  Agoncilio had several big lies. He mentioned the Battle of Bull’s Run on “October 8, the remnants of the Japanese fleet were wiped out by the planes of the Third Fleet” Admiral Halsey’s late response to Admiral Clifton Sprague’s call for help resulted in the escape of Kurita’s fleet in the San Bernardino Strait and the planes sank only one minor vessel. Agoncillo’s coining of the battle of Bull’s Run was an invention to show off to his readers about his caliber as a historian. He failed to mention Halsey’s decision to move all the third fleet to pursue Ozawa’s carriers nearly resulted in the near destruction of MacArthur’s Leyte Landing.

Of course, Agoncillo relished the opportunity of criticizing Spain and the Church. On page 389, “There are no reliable data to show the percentage of literacy at the close of the Spanish period but it is probably safe to assume that the figure was somewhere between 5 and 8%.” Agoncillo cited no reference for this assumption but he was wrong for there were reliable figures of the literacy of the Philippines early in the American period and this is in the 1903 Census was 44.2%. There are corresponding figures from the Dutch East Indies, British India, and Thailand.

Agoncillo depicted the Philippines during the last decade of Spanish rule as economically depressed. He mentioned Manila as “all slums.” The trade figures showed that the last three decades of Spanish rule were a prosperous time. Here are the figures for 1890 to 1896:  (missing figures)

George Malcolm, founder of UP College of Law and professor of Laurel when he was a student, asked Tañada to look at Laurel’s file. Malcolm wrote after reading the files: “It leaves a bad taste in the mouth.” Agoncillo was silent on Quezon’s pork-barrel politics, his role in the PNB scandal which led to the insolvency of the bank. No discussion of the evils let loose by Roxas Amnesty Proclamation. Of the Garcia administration, Agoncillo did not write about Garcia’s scandalous overspending in the Nationalists Party presidential convention and moderates which was more productive; the giveaway of the UP to the radicals by cowardly Marxist and Roman catholic hater Salvador Lopez, press deceptive coverage of the 1958 and 1962 to secure the presidential nomination; the appointment of brother Cosme Garcia as Secretary of Foreign Affairs; his appointment of fake scientist Marcelino Calinawan as Customs Commissioner even after it was exposed that he lied about his being a student at Harvard, his inaction on the so-called “White Paper” detailing corruption in the government and the worst; his buying a luxurious presidential yacht that was more luxurious than the yacht of the US President and that of Queen Elizabeth with reparation money at the time that he called for austerity in the government because of the shaky treasury.

Blogger’s note: This is an undated, incomplete and unpublished article draft of the late chemist-historian Pio Andrade Jr. I decided to cut it into two parts. Except for minor edits, I have reproduced the original. This is the last work of Andrade in my possession that has not been published.