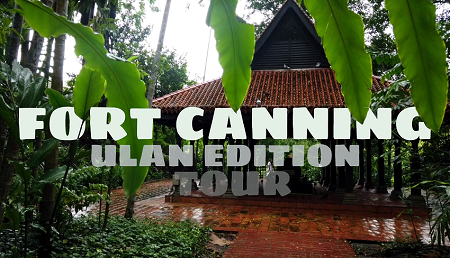 I have been to Fort Canning too many times. Strolling around the hill is good exercise. While it’s a recreational area for most of us, many forget how historic it is. You dig deep and long enough you’ll find pieces of evidence of its past.

There’s actually an archaeological dig exhibit not far from the tombstone of the island’s king. They built a roof around it so people would be made aware of the hill’s many layers of history. It also acts as a shelter for some of our kababayan domestic helpers who picnics around the area 😉

Last week I decided to do some exercise and vlog about the old fort. Yes, my new pass time as of late, vlogging.

This is the third in a series where I talk about places and stuff that have historical links to us Filipinos here in Singapore. The first two was about the places connected to Emilio Aguinaldo’s short, but momentous trip to Singapore.

This last one is about the old Malay royal who made Fort Canning (back then Bukit Larangan) his seat of power. The Majapahit deposed him and he fled to Malacca. This ancient Indonesian empire was mentioned to have once control over the sultanate of Sulu during the height of its power.

According to the founder of modern Singapore, Stamford Raffles, Manila was once a vassal state of the Majapahit. So if you look back in time, the island of Singapore and some of our ancestors and their lands were ruled by this empire. It was there in Fort Canning where they fought and deposed Iskandar Shah.

Go watch the vlog. It’s short, won’t take much of your time!