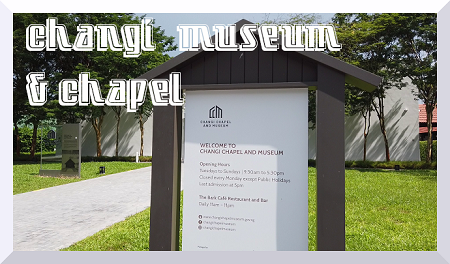 Whenever I pass by Changi area, these are the first three things that come to mind: Changi Museum, Changi Prison, and Flor Contemplacion. The Contemplacion part, I will explain later.

Changi Museum is a must-see attraction in the area. We have always lived in the eastern part of Singapore. Next to Changi, a town called Tampines. We have taken to this part of the country; we love it.

The museum is one of my favourites, and I often bring visitors for an impromptu tour. My ever first visit was back in 2012.

The Changi Museum and Chapel underwent a two-year renovation. It was supposed to open last year, but the pandemic hit.

Changi Museum and Chapel reopened this month. Today (May 30) is the last day to visit the museum for free! I’m not missing a free ticket.

The museum was redesigned. New displays, such as prisoner’s belongings, allow visitors to see how Changi prison POWs lived. The interactive exhibit was amazing.

The POWs artwork was a window into their minds- all the turmoil and conflict of their situation. I spent the most time in this section of the museum.

I was impressed with all the additions. It’s worth the time to visit and see the museum in person.

One thing that struck me the most while visiting the museum was an actual prison door.

What a cool idea to have this added.

I have never seen a prison door with both an eye-level and ground-level observation sliding panel before.

When I first heard the word “gaol” I thought of a humanoid monster. Apparently, that’s what British jails were called back in the day.

Do you remember that movie “Bridge Over the River Kwai”? Some of the railway labor for the entire railway were Changi internees.

I think I just dated myself with that old movie.

In contrast to today’s increasing secularism, wartime seems to drive people more towards faith. The chapel is a testament to the faith that prisoners of war kept during the most difficult times in their lives.

The Chapel is the focal point of the museum. As an internment camp, it was the center of prayers and spiritual gatherings.

Many POWs who were moved out of Changi never returned. Every day became a life-or-death situation for many.

I’ve seen the museum several times but its effect on me remains. It forces one to reflect on the faith and sacrifice of allied forces during WWII.

The freedom we have today did not come for free. It is easy to forget how much all of us owe to WWII veterans.

The Japanese were very strict, but some have showed humanity.

Like the story of Harold Young, who was an avid artist. The Japanese provided him with art supplies.

There were many Japanese soldiers at the prison camp who shared his passion for drawing.

Mr. Young’s sketchbook is on display in the museum.

I recall a story that former UST archivist, Ernie de Pedro told me of Japanese soldiers during WWII in Ilocos who joined farmers planting rice.

The soldiers took nothing and left the peasants at peace.

They may have been farmers back in their country. Farming was their way to remember their former lives.

Changi Museum is a small museum compared to others here in Singapore. What it lacks in space, it makes up for in presentation.

You will find everything in its perfect spot. You get a feeling like you’re traveling back in time.

Not all museums have to be large and imposing. In Changi Museum, they have a story to tell, and it’s told perfectly.

Okay, now to why I’m reminded of Flor Contemplacion whenever I’m in the Changi area.

I was a teenager in the 1990s. I remember when Flor Contemplacion’s case made headlines. Local media covered it morning to night.

There was even a movie made about Flor Contemplacion’s life! The Philippine President pleaded for the helper’s life to be spared.

The case stirred up so many Filipino’s emotions. My mom cried when we heard about Contemplacion’s death. Maybe that’s why it stuck to mind all these years.

Today, this Contemplacion issue is just one of many national issues that have been forgotten.

What did we learn?

I think very little was learned as evidence of where our country is at to this day.

The issue the incident shed light on is the thousands upon thousands of Filipinas leaving the motherland.

So many preferring to work as helpers abroad than stay and take care of their children.

It’s a difficult choice, made because there is no other option for many of our poor kababayan.

It’s a vicious cycle with no end in sight.