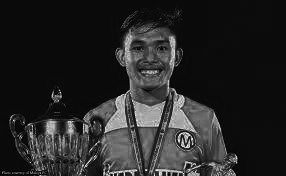 I work 6 days a week. So I try to tune out negative news and focus on what I can control. But the deaths of Keith and Nolven Absalon by the CPP NPA were disheartening and frustrating. I have been reflecting on the deaths of the Absalon cousins in Masbate City for some days now.

I know that writing about this here wouldn’t make any difference. So, maybe I’m blogging to get things off of my chest.

The future for the Absalon cousins was bright. Kieth was an up-and-coming football player. Played for FEU and was a future Azkal for sure. He’s got so much potential. But we will never get to see him fulfill it.

No thanks to the communist party of the Philippines, the NPA’s, godless and cold-hearted killers.

Aren’t these people pretending to be protectors of human rights? But they toy with Filipino lives as if pieces on a chessboard?

What bothers me most is some of our leaders’ duplicity. Where are the politicians, the senators, the congressmen that wanted to defund NTF ELCAC because they were “guilty” of calling out communists?

By the way, most were red-tagged by no less than their figurehead, Joma Sison. Just looks at the kind of games these people are playing.

I think Senators Gordon, Villanueva, and Drilon, among others, were offended because Gen. Parlade called them “stupid”. Parlade should change that statement to politicians that lack conviction. Whatever gets the most votes that’s where they go. Mind you, some of these m******f****s have presidential aspirations. Dios mio.

These politicians lost their minds with this present administration fixing Manila bay using “dolomite”. But with NPA killings, we hear nothing, nada, radio silence.

What’s with the silence and crafted response?

If I have to guess, many of our politicians like the attention they get when they’re going up against Duterte and his government. That is all fair and game. But at least distinguish who our enemies are.

The Left has its allies in the media and they are by far, the noisiest. Those who pretend to be progressive, they know that it garners brownie points. Many of our politicians fear this. I don’t think they align with communist ideology. It’s personal interests, all business for them.

In fairness, I have seen some criticism coming from the usual get-along go-along politicians for the NPA killings. But noticeable is how the words are crafted in a way not to offend anyone. They don’t even mention “NPAs” “Reds” and “communists” for the deaths of Kieth Absalon.

They already admitted that they did kill those boys, and these elected leaders do not dare to even mention the perpetrators!

Weakness cannot be hidden. Pretentious people are always found out in the end, and they lose all credibility when that happens.

The Death of Absalons, an eye opener

If we are to listen to the legal fronts of the left, we have to applaud the NPA’s making an official statement that they are responsible for the deaths of the Absalons. For them, this is worth our admiration.

There are even people from their camp saying that the use of an improvised explosive device (remotely?) was within Geneva convention rules. Seriously, what’s wrong with these people?

Would they surrender the NPA men who went on the killing spree there in Masbate? Of course not. They deserve prosecution to the highest degree but we can’t touch. They are outside our country’s judicial system.

Guess who has to clean up the mess—our soldiers.

The Red’s narrative is that the military is abusive, they want us to buy it.

Civilians who are harmed by the military have legal options that they can take to protect themselves.

What is the Absalon family recourse for the tragedy of losing sons to get justice here?

It looks like our reliable uniformed men and women are the only option for justice. People who have always been there for us and that many of our politicians half-heartedly support.

The only reason why these sobs are apologizing is that this entire incident has become a PR nightmare. I believe most Filipinos are sick and tired of them.

The Makabayan bloc, calls on the government to resume peace talks to avoid incidents like what happened to the Absalons. These people must think of us as idiots.

But you gotta give credit to them. They know how to spin everything and everyone around, which is their true skill when it comes down right to the wire of things.

That is why the government and the NTF ELCAC has a steep mountain to climb in countering the communist propaganda.

If there are any politicians calling to disband or defund any military organization countering the communists, you’ll never want them in office.

The rebels do not give up their men. That’s something I am sure is never considered.

So what is the solution? How can we stop the New People’s Army?

There are no short-term solutions. But we can start electing competent local leaders. Continue to strengthen the military. But would this end the red insurgency?

Not until we get tough, they will not go away. They will never go away.

You know what I think? We have to go the Singapore route. Do an Operation Coldstore.

Total crackdown on all members of the communist party of the Philippines and all their masked patrons, Like, NOW.

This is what the government should do in order to eradicate NPA
https://www.wakalan.com/government-politics/heres-how-the-government-can-totally-eradicate-the-new-peoples-army/