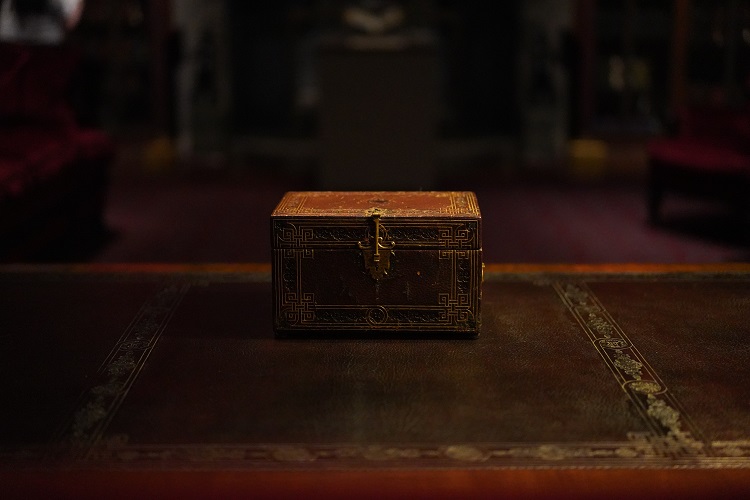 These days, when we hear the word baúl or kabán (sp. baúl) We are reminded of treasures (tag. kayamanan) buried deep, somewhere.

Most people have never seen one in person let alone have used or owned one. Lucky for me, I have seen old houses with bulky trunks in them.

Baúls then are everyday items that most have in the household. These were meant to protect important possessions.

A Baul and A Lithograph

A Spanish gentleman, Valentin Martinez del Salto, contacted me this week about an antique chest he was restoring. He found this blog when he searched “Ker y Cia”(Eng. Ker & Co.). He was surprised to find that the old trunk came from a Philippine-based company.

Then, the Philippines was still recognized as part of the hispanic world, so it is not surprising that the images they want to convey abroad are of an hispano culture.

The Ker y Cia building is located on Calle Ortiz, not far from Mulle Looney (Iloilo River’s Wharf) and it’s a heritage landmark in Iloilo.

Ker y Cia is a company that exports and sells various appliances. One partnership they had, perhaps their biggest, was with US Rubber which ended in a lawsuit.

Crawling through an online search engine pulled up a few old items from the company. They’re mostly collectibles and antiques that fetch higher values.

Ker Y Cia is a well-respected provider of high-quality products. Most of the items have lithographed coloured images depicting local and Spanish scenes.

I am pleasantly surprised to find that Ker y Cia, founded in 1827, is still around, after all this time. These days, they sell various construction materials.

But, are they the same company that exported Valentin’s baúl to Spain more than a century ago?

If the Ker y Cia now is indeed the same company, then they’re one of the oldest companies, if not the oldest operating company in the Philippines.

The Destileria Limtuaco was founded in 1852, followed by Ayala Corporation two years later. The San Miguel Brewery started operations only in 1890. while the Benguet Corporation established their mines at around the turn of the twentieth century.

This is something that I would need to investigate. More on this in a future article.

Mentioned in a Spanish Novel

The hispanist historian and artist, Guillermo Gomez Rivera, a native of Iloilo have made sure that the Ker y Cia building will stay in people’s memory with his depiction of it in his book “Quis ut Deus.”

Between the two novels, 56 years passed. These are the last Spanish literary works by Filipinos written in the country.

Valentin likely has never seen the Philippines in person (I think it is more likely that I am wrong). But this conspicuous baúl transported him to the land of old. It made him think of an often forgotten bridge between Madre España and Filipinas.

Reflecting on the past can help us ground ourselves in the present. As politics and education change how history is taught, they alter our historical narrative. Things get erased in our books, which is why we forget.

It’s these most mundane of objects that sometimes takes us back. They’re time-travelling machines. Only that you don’t take the ride, you just imagine what must the past have been like.

SINGAPORE'S FORT CANNING HISTORY THAT FILIPINOS SHOULD KNOW?
«
Prev
1
/
4
Next
»